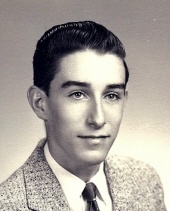 Peter D. Showers, Sr., of Kingston, N.Y., passed away Aug. 15, 2016, at Wingate at Ulster, Highland, N.Y. Born Feb. 4, 1940 in Tannersville, he was the son of the late David E. and Juanita "Bunny" Showers. He was retired from I.B.M. in Kingston, N.Y. He was a member of the Quarter Century Club and also coached K.A.L.L. Baseball for both his sons and best bud Duff. He was a craftsman and made numerous toys, chairs, and bear catchers for his grandchildren. Mr. Showers was a sports fan of any major league baseball team that beat the N.Y. Yankees. Survivors include three sons, Peter Jr., Steven and Joseph (Jaimie); one daughter, Karen McSpirit (Dennis); one sister, Sara-Jane Crispell; one brother, U.S. Airforce Retired Sr. Chief Master SGT Richard A. H. Showers; ten grandchildren, Christopher, Danielle, Garett "Duff" Meredith, Sara-Anne, Ciaira, Katie, Liberty, Ayden, Bryson; as well as three great-granddaughters and numerous nieces and nephews. He was predeceased by his wife Sandra E.D. Showers and his sister Susan Somerville Showers. Calling hours will be Thursday, Aug. 25, 2016 at the Simpson-Gaus Funeral Home in Kingston from 5 to 7 p.m. Friday Aug. 26, 2016 services at 1 p.m. at the Katerskill United Methodist Church in Haines Falls, N.Y. Interment to follow in the Tannersville Evergreen Cemetery.
To order memorial trees or send flowers to the family in memory of Peter D Showers, please visit our flower store.