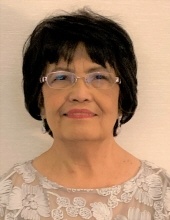 Purificacion N. de Perio, affectionately known to her family and friends as “Puring”, passed away on Thursday, February 11, 2021. She died unexpectedly from complications due to COVID. She was 78.

She is survived by her husband of 43 years, Virgilio de Perio, of Queens, New York, a daughter, Jessica de Perio Wittman and her husband Philip of West Hartford, CT, a son, Jonathan de Perio and his wife Pauline of Queens, NY, and her brother Albino Navasca and his wife Inocencia of Carlsbad, CA. She is also missed and lovingly remembered by her grandson, Jack Wittman. Additionally, she is also survived by numerous brothers and sisters-in-law, cousins, nieces, nephews, and their families.

Born in Antipolo, Philippines, Purificacion was the only daughter of the late Emilio & Felisa Lardizabal Navasca. She graduated from the University of the East and spent the early part of her career serving as an educator in the Visayas as well as the Jose Rizal College in Mandaluyong, Philippines. She began her immigration process to Canada, sponsored by her Uncle Antonio. After immigrating to Canada, she transitioned into healthcare as a Nurses Aide in Queen Elizabeth Hospital in Toronto. She would soon meet her husband, Virgilio, and they married in 1978. After settling in New York City, Purificacion spent the rest of her healthcare career as a Ward Clerk in the Labor and Delivery unit at Flushing Hospital and Medical Center until her retirement.

Purificacion maintained her Filipino ties in the United States. She devoted her time to Pag-Asa Ng Pilipino, a local church organization, as one of its founding members.
Purificacion also enjoyed traveling to the Philippines, California, Canada, and Las Vegas to visit relatives. She also spent the last 3 years of her life traveling to Asia, Europe, the Middle East, and Africa with her husband, Virgilio. When she was not traveling, she could be found experimenting in the kitchen. She especially loved being surrounded by the family’s young ones.

In accordance with Filipino Catholic tradition, a socially-distanced prayer service will be held on Saturday, March 27, 2021 at 3:00 PM at St. Peter Claver Church in West Hartford, CT, followed by a mass offered in her name. In lieu of flowers, memorial donations to the Miracle League of Connecticut, 68 South Main St. BSMT 100, West Hartford, CT 06107, are welcomed.

A Mass of Christian Burial will be celebrated on Saturday, February 12, 2022 at 10:30 AM at St. Gregory the Great, and an inurnment will be held at Mt. Calvary Cemetery, Cheektowaga, New York.