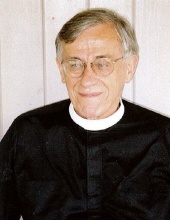 The Rev. David Louis Bronson died on Feb. 18th, 2019 at Woodland Pond, where he had made his home for the past three years.

He was born on July 1st, 1929 in Jackson, Michigan, one of 5 children born to his parents Glenn and Yetchen Bronson. He grew up attending church which instilled a deep faith in him. He learned to love music through his mother, who was a church organist. The Church and music would become lifelong passions for him.

He completed a degree in architecture at the University of Michigan, but then went on to pursue his calling as a priest. He graduated from Berkeley Divinity School (now affiliated with Yale University) in 1957, and was ordained soon afterwards as an Episcopal priest.

After ordination, Fr. Bronson served at two parishes in England: St. Mark’s in Hampshire (1957-1959) and St. Lawrence Church in Surrey (1959-1961). His love of the Church, history, architecture, along with the lifelong friends he made there combined to make this a fondly remembered time in his life.

In 1963, he was called as the Rector of Holy Cross Episcopal Church in Kingston, where he would serve for the next 25 years. While there, he oversaw extensive renovations to the church, purchased and renovated a new rectory and established an endowment. He was one of the founders of the Ulster Chamber Music Series, which continues to perform at Holy Cross Episcopal Church to this day. He hosted numerous acolyte festivals for area churches and participated in Kingston community activities. But he is most remembered for his faithful visitation of the sick at Kingston and Benedictine Hospitals. He visited hospitalized patients almost every morning—many recall looking up and seeing him come in with a cheerful greeting.

Upon his retirement in 1989, Fr. Bronson moved in with his partner, Wynn Reynolds, at his home on Cottekill Road in Stone Ridge. He was invited by then rector, the Rev. Robert Magliula to serve Christ the King Episcopal Church as an assisting priest. For more than 30 years, Fr. Bronson served faithfully and participated fully in the life of Christ the King parish. He was usually the first person to greet newcomers and was genuinely interested in getting to know everyone. He was always available for pastoral visits and assisting at the altar. He helped with the church’s renovation in 2002, and with planning capital improvements that are currently underway.

Fr. Bronson was an avid supporter of the arts, serving on the board of Maverick Concerts and volunteering at the Johnson Museum in Kingston. He had many interests including politics, local history, art and antiques, architecture, music, liturgy and his beloved Labrador retrievers. He could recite the Prologue to John’s Gospel in Greek in his 80’s. He is survived by nieces and nephews and many loving friends.

A service for Fr. Bronson will take place on Saturday, February 23, 2019 at 11am at Christ the King Church, 3021 NY-213, Stone Ridge, NY. Bishop Dietsche will be there along with many others including their musicians and singers.

In lieu of flowers, contributions may be made to the Ulster Chamber Music Series, 301 Kiersted Ave. Kingston, NY 12401 or Maverick Concerts, P. O. Box 9, 120 Maverick Road, Woodstock, NY 12498.
To order memorial trees or send flowers to the family in memory of Rev. David Louis Bronson, please visit our flower store.