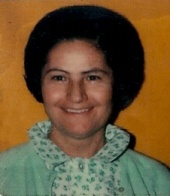 Rose Lucci, 87, a lifelong resident of Kingston, died Thursday, August 6, 2015 at HealthAlliance Hospital Broadway Campus. Born in East Kingston, she was a daughter of the late Charles & Theresa Costello Lucci. Rose worked for IBM in both Poughkeepsie and Kingston. Rose is survived by a sister, Jeanette Antenucci of Poughkeepsie, a sister in law, Julia Lucci and several nieces and nephews. In addition to her parents, Rose was predeceased by three sisters Mary Cole, Susan Lucci, Emma Carson and four brothers John, Frank, Anthony and Joseph Lucci. Rose will be reposing at the Simpson-Gaus Funeral Home, 411 Albany Ave on Monday from 10:30 AM to 12:00 noon, at which time there will be a procession to St. Colman's Church for a 12:30 PM Funeral Mass. Interment will follow in St. Mary's Cemetery.
To order memorial trees or send flowers to the family in memory of Rose Lucci, please visit our flower store.