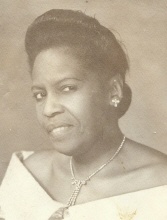 Ruth B. Powers, 99, of Kingston, went home to be with the Lord on Saturday, June 21, 2014 at Ten Broeck Commons. Born in Asbury Park, NJ, she was a daughter of the late Alley & Mary Anderson Jo. Ruth started her working career as a nanny and then as a nursing assistant at Kingston Hospital before working at Golden Hill Health Care Center where she retired at the age of 75. Ruth enjoyed dancing, pets, reading, cooking and gardening. She enjoyed her vegetable garden, but most of all she enjoyed spending time with her family. Ruth is survived by her daughter, Crystal Goodman of Kingston, 12 grandchildren, Gail, Paul, Steven Riddick, Marie, David, Daryl, Lisa, Gina, Shawne, Malik, Hassan and Arkeem. Many great grandchildren and great great grandchildren also survive. In addition to her parents, Ruth was predeceased by her husband, Frank Powers who passed in 1971, a son, Winston Riddick, Sr a grandson, Winston Riddick, Jr. and a brother, George Joe. Ruth will be reposing at the Simpson-Gaus Funeral Home, 411 Albany Ave on Tuesday, June 24, 2013 from 2-4 and 7-9 PM. A Funeral Service will take place on Wednesday at the funeral home at 11:00 AM, with Elder Paul Brennan of the Fountain of Life Christian Church officiating. Interment will follow in St. Mary's Cemetery.
To order memorial trees or send flowers to the family in memory of Ruth B. Powers, please visit our flower store.