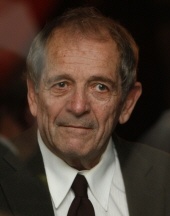 Sanford "Sandy" Hoffman, 80, of Saugerties, died Friday, April 14, 2017 at his home. Born in the Bronx, he was a son of the late Benjamin and Hannah Hoffman. Sandy lived in New York City for most of his life, before relocating to the Hudson Valley in 1997. Sandy was a commercial illustrator, a graduate of the Cooper Union School in New York City. He was a true renaissance man, a lover of music, the arts, food and people, and had the uncanny ability to tell a story unlike anyone else. He also loved Danny Kaye movies, his New York Yankees and a good pastrami sandwich with deli mustard. Sandy is survived by his daughter, Merryl Hoffman and her husband Robert Wolff of New York City, and their sons Salem and Ethan, Sandy's brother, Stanley Hoffman (Lu Willard) of New York City, and niece Norma Norris (Mitch) and nephew Russell Hoffman (Xiomarra). A graveside service will be held on Sunday, April 16, 2017 at 11:00 AM at Montrepose Cemetery with Rabbi Jonathan Kligler of the Woodstock Jewish Congregation, officiating. A memorial service will be held in Sandy's honor during the summer of 2017 for all family, friends and acquaintances, with a date to be announced. Simpson-Gaus Funeral Home, 411 Albany Ave is honored to assist the family with the arrangements. The family requests that memorial donations be made to the Albany Stratton VA Medical Center Albany, NY or the American Cancer Society, Memorial Processing, 6725 Lyons St., East Syracuse, NY 13057.
To order memorial trees or send flowers to the family in memory of Sanford "Sandy" Hoffman, please visit our flower store.