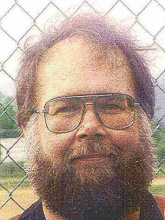 Scott A. Ogden, 48, of Violet Ave., Poughkeepsie died Wednesday, October 22, 2003. He was born in Sturgis, MI on June 14, 1955, a son of Barbara Teadt Ogden and the late Walter E. Ogden. A founding member of the Sturgis Toy Run in Sturgis, MI, he moved to this area seventeen years ago. Mr. Ogden was past commander and member of the Sons of the American Legion Post 150, Kingston. A member of the Kingston Bowling Association, he served as president of the Father-Son Bowling League. He was a former member of the Independent Tavern League, Kingston. For the past 17 years he worked at Great Eastern Color Lithographic Corp. Mr. Ogden was a free lance photographer with pictures published in many biker magazines. Surviving in addition to his mother, are his wife Grace Cole Ogden and two sons Sean N. and Nicholas A. Ogden; one sister Lori Dolan, aunds, uncles, nieces, nephews and cousins. Reposing at Simpson – Gaus Funeral Home, 411 Albany Ave., Kingston on Monday from 6:00 – 9:00 PM. Funeral services will be conducted Monday at 8:00 PM at the funeral home. Cremation will be private. A memorial fund has been established for his sons, c/o “Key Bank.” There will also be a gathering on November 6th from 5:30 – 8:30 at the American Legion, Kingston. The Kingston Bowling Association will gather at the funeral home on Monday at 7:00 PM. The Sons of the American Legion will gather at the funeral home on Monday at 7:30 PM. A funeral service will be conducted at the funeral home at 8:00 PM on Monday by Deacon Jack Peters.
To order memorial trees or send flowers to the family in memory of Scott A. Ogden, please visit our flower store.