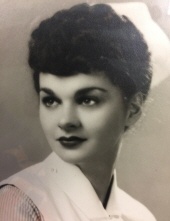 Shirley Rose Levine Weiner, 93, died on June 10, 2019 in Syracuse, NY. The youngest of twelve children, she was born in Burlington, Vermont to Fannie and Louis Levine.

Shirley earned her R. N. Degree at the Mary Fletcher School of Nursing in Burlington. She married Theodore (Ted) Weiner shortly thereafter and moved to Granville, NY where Ted and his brothers owned and operated Weiner Brothers Burlap Bag Company and where their daughters, Francine and Ellen, were born.

After several years they moved to Kingston, NY, Ted’s hometown. Shirley began working evenings as a private duty nurse at Kingston and Benedictine Hospitals. Once both her daughters reached school age, she switched to days at both hospitals and added Orthman’s Sanitarium to her resume.

She eventually became a nursing instructor at Ulster County Community College and the later part of her career was spent as a nursing supervisor in both the Obstetrics and Emergency Departments at Kingston Hospital.

From its inception in 1976 until Alzheimer’s would no longer allow, Shirley, along with other registered nurses, participated in the Harvard Nurse’s Study in which they responded to questions regarding their own health. With their medical background, information collected from the participating R.N.s is considered to be a key long-term population study on a wide variety of women’s health issues that is still ongoing.

Shirley will be remembered as a wonderful wife and mother, quintessential yet humble nurse, extraordinary baker, and a true beauty both inside and out. And oh yes, as the best grandma ever. Just ask her grandkids.

A Funeral Service will be conducted on Sunday, June 16, 2019 at 10:00 AM at the Simpson-Gaus Funeral Home, 411 Albany Ave with Cantor Robert Cohen, officiating.

The family requests that memorial donations be made to
National Processing Center
Alzheimer's Association
POB 96011
Washington, DC 20090-6011
To order memorial trees or send flowers to the family in memory of Shirley Rose Levine Weiner, please visit our flower store.