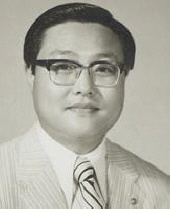 I wanted to say something that was complicated, sophisticated and fit for a king to describe my father. But as I remembered him, I remember him best as a simple man. Simple was his way of life. Each day like clockwork, he woke up, opened the store and with our mother at his side, they worked hard. At the store, they had good days and they had bad days, busy days and slow days, through it all, they always had each other. Mom and dad worked hard each day so that their sons could have a good life and thrive here in the United States. I never remembered them taking a vacation. Like good parents they pushed my brother and I to do well in school, play sports and to take advantage of everything America had to offer. That is why they came here from Koreafor me and my brother. They were the most unselfish parents you'd ever met. They had a good life in Korea. My dad had graduated from the prestigious Kyun-Gi High School and Seoul National University. When my mom passed away in 2005, I urged my father to sell the store and to enjoy life for a whiletake a vacation, visit family and friends. Instead, like clockwork, he woke up each morning and opened the store for business. In my heart, I knew felt most comfortable in the store, selling what he could and enjoyed seeing some of his favorite customers. When he died, he was not a rich man as measured by dollars and cents. His success was instead reflected by the family he left behind. He was proud of his two sons and the men they became, both of us successful in our respective careers. He was a proud grandfather to my son RyanIn Jo is the Korean name my father gave him. He was eagerly awaiting the birth of his second grandchild, a grand-daughter to be born this coming May. When I drove him home the day after Ryan's 1st birthday party this past January, I remember him saying that he was simply "happy". He was a great dadcaring, unselfish, sometimes stubborn but wise and brilliant. Today is the first day of Spring and although he did not live to feel the warmth of it this year, I believe it is his warmth we are feeling today. He is reunited with our mother and probably looking for a place in heaven to open up another storeI wish them well and until we meet again. ----------------------------------------------------- Soo Chul Lee of Greenkill Ave., Kingston died Wednesday, March 17, 2010 at Westchester County Medical Center. He was 68. He was born in Seoul, South Korea, a son of the late Wan Bae and Soon Yoe Choi Lee. Mr. Lee was educated at Kyungi High School in Gangnam-gu, Seoul. He received his undergraduate degree and M.B.A. at Seoul National University. Mr. Lee married Jung Hwa Kim on August 25, 1974. In 1978 they immigrated to the United States and settled in New York City. In 1986 they moved to Kingston and opened Charles Grocery-Deli on Greenkill Ave. Mr. Lee owned and operated the store until his death. His wife Jung Hwa Lee died December 13, 2005; one brother Soo Hyun Lee died previously. Surviving are his two sons William I. Lee and his wife Laura of Sloatsburg, Thomas K. Lee and his wife Jennifer of New York City; three brothers Soo Young Lee of Yong In, South Korea, Soo Ho Lee of Little Neck and Soo Chang Lee of Flushing, one sister Soo Bok Lee of Dix Hills, one grandson Ryan William Lee and one expected granddaughter, many nieces and nephews. Funeral services will be conducted Saturday at 1:00 p.m. at Simpson - Gaus Funeral Home, 411 Albany Ave. Rev. Joong Kim will officiate. Cremation will be in Poughkeepsie Rural Cemetery.
To order memorial trees or send flowers to the family in memory of Soo Chul Lee, please visit our flower store.