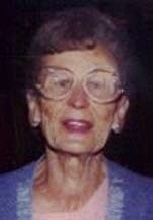 Stella Lahey, of Meadow Hill Rd., Newburgh and formerly of New Windsor died May 17, 2005. She was 90. Stella was born in Newburgh on November 4, 1914, a daughter of the late Peter and Anna Wojecki Sladeski. For many years she worked as a garment worker in Newburgh and belonged to the International Ladies Garment Workers Union. A longtime resident of Cofey Ave., New Windsor, Mrs. Lahey was a parishioner of St. Francis of Assisi Church, Newburgh and a member of the American Legion Ladies Auxiliary, Newburgh. Her husband James Lahey died in 1965. One sister Elizabeth Knox, and seven brothers Edward, Joseph, Frank, Alex, Paul, Stanley and Chester Sladeski all died previously. Surviving are one brother Leo Sladeski and wife Marcia of Balmville, and many nieces and nephews. Visitation will be held from 4:00 – 7:00 PM Friday, May 20 at White and Venuto Funeral Home, 188 N. Plank Rd. (Rt 32), Newburgh. A Funeral Mass will be celebrated at 12:00 Saturday at St. Francis of Assisi Church, Benkard Ave., Newburgh. Burial will follow in St. Francis of Assisi Cemetery.
To order memorial trees or send flowers to the family in memory of Stella Lahey, please visit our flower store.