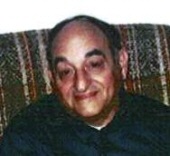 Theodore “Ted” Weiner of Fairview Ave. died Thursday, May 18, 2006 at Kingston Hospital. He was 83. Born January 27, 1923 in Schenectady, he was the son of the late Hyman and Mina Avnet Weiner. A WW II veteran, he served in the United States Air Force as a photographer. Upon returning from WW II he and his brothers formed the Weiner Brother's Burlap Bag Reconditioning Company in Granville, NY. Later he was affiliated with Kaplan Brother's Burlap Bag Company in Kingston. He then went on to work for Hilo Furniture as a Manager in Port Ewen. After that he managed the Standard Furniture store in Kingston. Lastly, he was employed by Carpet Garage, Town of Ulster, as a Manager. On March 2, 1946 he married Shirley Rose Levine. An area resident since the age of seven, he was a former Board Member of Agudas Achim and was a member of the Uptown Business Association. Ted also founded the Uptown Food Festival in Kingston. One daughter, Francine Zweben and her husband Robert of Kingston; three brothers, Sam, Harry and Meyer Weiner; and one sister, Sophie Basch all died previously. Surviving in addition to his beloved wife of 59 years, is a daughter, Ellen DeWitt and her husband Douglas of Kingston; four grandchildren, Joshua and Kayla Zweben, and Aaron and Laurel DeWitt and many nieces and nephews also survive. Funeral services will be conducted on Sunday, May 21, 2006 at 1:00 at Simpson-Gaus Funeral Home, 411 Albany Ave., Kingston. Rabbi Yitzchok Hecht will officiate. Burial in Montrepose Cemetery. Memorial contributions may be made out to Francine and Robert Zweben Girl's Swim Team Memorial Fund, Care of Glen Maisch, Athletic Director, Kingston High School, 403 Broadway, Kingston, NY 12401.
To order memorial trees or send flowers to the family in memory of Theodore Weiner, please visit our flower store.

Home of Ellen and Douglas DeWitt