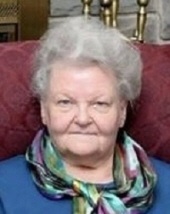 Virginia Alice Whitaker Beesmer, 81, West Hurley, New York, passed to her eternal reward on Sunday, August 6, 2017, in the home of her oldest son and daughter-in-Law, Rev. Donald and Linda Snedeker, after a yearlong battle with auto-immune non-alcoholic liver disease. She was born in Mt. Marion N.Y., the daughter of the late Theodore (Ted) Whitaker and Elizabeth Law Snedeker. She was educated in Kingston and Sandy Creek, New York, area schools. In around 1951, she moved from the Kingston area to the Snedeker Family Farm in Lacona, New York, where she resided in the upstate New York area, before returning in 1974, back to the Kingston, New York area where she has resided for the last 43 years. In the early part of her life she was closely associated with the Free Methodist Church and was baptized in the Old Tremper Avenue Free Methodist Church of Kingston, New York in 1939, by then Pastor, the late Rev. Lewis Smith. It is believed that she became a junior member of that church sometime later. She had many treasured memories of attending with her mother the summer annual Free Methodist Camp Meetings at Hancock N.Y., often traveling there by train from Kingston. During the last 40 years of her life, she was closely associated with and supported the Evangelical Wesleyan Church, and was a faithful supporter of the Fox Hill Camp Meeting, near Northville, N.Y., and attended the Lake Idlewild and Great Bend, Pa churches, when she was in the area. She also attended the Stone Ridge N.Y., Pilgrim Holiness Church for several years. For most of her life she was a stay at home mom and housewife, but she did work for a time at a needle manufacturing supply company, in Syracuse, N.Y. She was the bookkeeper and secretary for the Beesmers Construction Co. Inc., until it closed in 2011. Her lifelong dedication for over 50 years was for the love, care, health, and happiness of her youngest disabled son, Thomas Bagalonis Jr. Her grandchildren and her great-grandchildren were the light of her life. She is survived by her four sons, Rev. Donald D. Snedeker and wife Linda, Randy Snedeker and wife Kathy of Gloversville N.Y., Brian Bagalonis and wife Joan of West Hurley, N.Y., and Thomas Bagalonis Jr., of Woodstock N.Y., Two step daughters, 18 grandchildren, 34 great-grandchildren, and many dear friends. She is pre-deceased by her three husbands; Robert C. Snedeker, Thomas Bagalonis Sr., and Donald G. Beesmer, along with her step-father Rev. Clarence A. Snedeker, a sister Marjorie Whitaker Gagne, and a nephew, Timothy A. Fracassee. Virginia will be reposing at the Simpson-Gaus, 411 Albany Ave. on Thursday, August 10, 2017 from 12-2 PM. The Funeral Service will be held at 2:00 PM, at the funeral home, with Bishop W.L. Sarber, Rev. Donald D. Snedeker Jr. and Rev. Donald D. Snedeker Sr., officiating. Interment will follow in the family plot at the Mt. Marion Cemetery. The family requests that memorial donations be made to the one of the following; The Parking Lot Building Fund of the Stateline Evangelical Wesleyan Church of 26710 State Route 11, Great Bend, PA. 18821 or The Fox Hill Camp Improvement Fund 225 Fox Hill Road, Northville, N.Y., 12134.
To order memorial trees or send flowers to the family in memory of Virginia Alice Whitaker Beesmer, please visit our flower store.