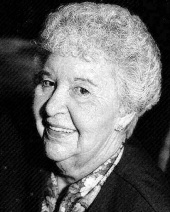 Virginia M. “Ginny” Flanigan of Ulster Landing Road, Town of Ulster died Wednesday, September 12, 2007 at Northern Dutchess Hospital. She was 79. She was born in Poughkeepsie on January 25, 1928, a daughter of the late Everson and Catherine Hill. For many years she worked as a seamstress at Halpern Manufacturing and other area garment factories. Later, she worked in the cafeteria at Miller School for 10 years. Mrs. Flanigan was a parishioner, Choir member and former Altar Rosary Society member at St. Coleman’s Church, East Kingston. She was a member of East Kingston Fire Department-Ladies Auxiliary and a member of “Klickety-Klacks.” Her husband Frederick Flanigan died April 10, 1989. One brother Everson Hill, Jr. died previously. Surviving are two daughters Kathleen Gallagher and her husband Hank of Port Ewen, and Joyce Girard of the Town of Ulster; one son Frederick Francis Flanigan at home, three grandchildren Patrick Gallagher, Christopher and Matthew Girard; two great grandsons Brendan Gallagher and Connor Girard; several nieces and nephews. Reposing at the Simpson - Gaus Funeral Home, 411 Albany Ave. on Thursday from 2-4 and 7-9 PM. The funeral procession will be Friday at 11:15 AM from the funeral home. A Funeral Mass will be celebrated at St. Colman's Church at 12:00. Interment will be in St. Mary's Cemetery.
To order memorial trees or send flowers to the family in memory of Virginia M. Flanigan, please visit our flower store.