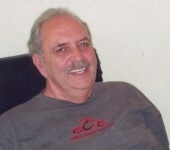 Walter J. Lyons of Saugerties died Monday, January 26, 2009 at Benedictine Hospital. He was 58. He was born April 24, 1950 in Kingston, the son of Lauretta Gulisano Lyons and the late Walter J. Lyons. He served in the army in Viet Nam from 1968-1969 serving as a helicopter door gunner with the 717th. Air Calvary, Ruthless Riders, A Troop. He received the Army Commendation Medal and Army Air Medal. His helicopter was shot down while rescuing a downed air crew. He retired from the Ulster County Highway Department as a truck driver following 33 years service in 2002. He enjoyed camping and motorcycle riding. Surviving in addition to his mother of Kingston are three sons, Brian and his wife Tonya, Jeff, Scott and one daughter, Kelly Miller and her husband Joe all of Saugerties. Also surviving is his former wife, Anne Merz Lyons and two grandchildren, Gavin Lyons and Cadence Miller. Friends will be received at the Simpson-Gaus Funeral Home, 411 Albany Ave., Kingston on Thursday from 2 - 4 and 7 - 9 PM. Funeral services will be conducted at the funeral home on Friday at 12:00 PM. Interment will follow in St. Mary's Cemetery, Kingston.
To order memorial trees or send flowers to the family in memory of Walter J. Lyons, please visit our flower store.