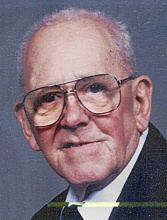 William G. Nessel of Ruby Road died Wednesday, October 20, 2004 at Kingston Hospital. He was 93. He was born in the Bronx on June 26, 1911, a son of the late George and Kate Baumback Nessel. On June 26, 1938 he married Elsie M. Smedman. For many years Mr. Nessel worked as a welder in New York City. He moved to Kingston in 1950 and worked at Island Dock. Mr. Nessel was a Kingston Professional Firefighter for one year and is a life member of the Kingston Exempt Firemen’s Association and the A.H. Wicks Volunteer Fire Company. He then worked at WGB Oil Clarifiers, Kingston and then as a security guard for Metropolitan Life. For 28 years Mr. Nessel was a school crossing guard at Washington Ave. and then Lucas Ave. in Kingston. A member of the Kingston Fire Police, he belonged to the Civil War Round Table and Loyal Order of Moose. Formerly of Hewitt Place, Kingston, for many years he belonged to the First Presbyterian Church, Kingston. He moved to Ruby in 2000 and belongs to the High Woods Reformed Church. His son in law Roger Snyder, four brothers Robert, Edward, Bert and Christopher Nessel and one sister Ethel Tschudy all died previously. Surviving in addition to his wife of 66 years are two daughters Lorraine Snyder of Lake Katrine; Eileen Nickerson and her husband William E. of Tillson; one sister Dorothy Sullivan of Washington; four grandchildren William and Erik Snyder, John William Nickerson and Kristina Kafel; four great grandchildren Christopher John Snyder, Jonathan and Matthew Kafel and Erica Snyder; many nieces and nephews. Reposing at Simpson – Gaus Funeral Home, 411 Albany Ave. on Friday 2-4 and 7-9 PM. The funeral service will be conducted on Saturday at 10:00 AM at the funeral home, Rev. Richard Rockwood will officiate. Interment will be in Wiltwyck Cemetery. Memorial contributions may be made to the High Woods Reformed Church, 1290 Church Road, Saugerties, NY 12477.
To order memorial trees or send flowers to the family in memory of William G. Nessel, please visit our flower store.