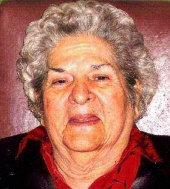 Ana Victoria Zerbi of Kingston died Thursday, April 9, 2009 at Golden Hill Health Care Center. She was 94. She was born in San Juan, Puerto Rico on May 21, 1914 a daughter of the late Francisco and Felecita Canada Escalona. On July 3, 1936 she married Plinio E. Zerbi and in 1942 they moved to New York City. They lived in Manhattan until moving to Kingston in 2000. Her husband Plinio died April 24, 2000; one brother Francisco Escalona and two sisters Antonia Cabanillas and Dora Escalona all died previously. Surviving are two sons Pliny E. Zerbi, Jr. of West Babylon and Frank X. Zerbi of New York City; one daughter Josephine A. Eschmann of Port Ewen; five grandchildren Lisa B. McCann, Glen A. Zerbi, Renee C. Eschmann, Sonia Bustamante and Jennifer M. Ardito; three great grandchildren Isabella, Jacqueline and Christian Bustamante; many nieces and nephews. Reposing at the Simpson - Gaus Funeral Home, 411 Albany Ave. on Monday from 4:00 - 7:00 p.m. The funeral procession will form on Tuesday at 9:15 a.m. from the funeral home. A Funeral Mass will be celebrated at St. Joseph's Church at 10:00 a.m. Cremation will be in Poughkeepsie Rural Cemetery with inurnment in Hurley Cemetery at a later date. Memorial contributions may be made to the "Golden Hill Activities Fund" 99 Golden Hill Dr., Kingston, NY 12401 for Unit A3.
To order memorial trees or send flowers to the family in memory of Ana Victoria Zerbi, please visit our flower store.