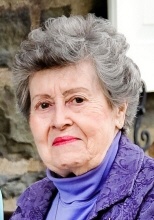 Anne Elizabeth Conlin Lawson, 77, a lifelong resident of Kingston, died peacefully Tuesday, November 18, 2014. She was surrounded by the love of those who remain to carry her on in their memories and she was welcomed into eternal embrace of those family and friends who have passed before her. Born in Kingston, she was a daughter of the late Raymond & Anna M. Conlin. Anne worked at IBM as a secretary from 1956-1964. Upon having children, Anne stayed at home to raise them. She then went to work for the Kingston School District as a teacher's secretary for 13 years before retiring in 1999. Anne enjoyed gardening, reading, while enjoying a hot cup of tea, but most of all she enjoyed spending time with her grandchildren. Anne is survived by two children, William J. Lawson and his wife Jodie of Niskayauna, NY and Catherine Anne Schoonmaker and her husband, Joseph of Kingston, two sisters, Noreen M. Knutsen and her husband Einar of Mission Viejo, CA, Lisa Pitcher and her husband Donald of Leesburg, FL, one brother, Bruce Conlin and his wife Sandy of Wassiac, NY. Two grandchildren, Jeremy and Jessica Lawson and many nieces and nephews also survive. In addition to her parents, Anne was predeceased by her husband William J. Lawson who passed in 2007 and a brother, Raymond G. Conlin. Anne will be reposing at the Simpson-Gaus Funeral Home, 411 Albany Ave on Sunday, November 23, 2014 from 1:00-5:00 PM. A Funeral Service will be conducted on Monday at 11:00 AM at St. James Methodist Church. Entombment in Wiltwyck Community Mausoleum will follow. The family requests that memorial donations be made to the American Cancer Society, Memorial Processing, 6725 Lyons St. East Syracuse, NY 13057.
To order memorial trees or send flowers to the family in memory of Anne E. Lawson, please visit our flower store.