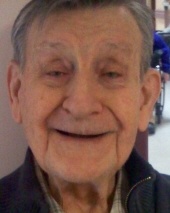 Anthony Marinzulich, 93, born January 17, 1920 of Castleton, former resident of Kingston and Saugerties, passed away peacefully Saturday, May 18, 2013 at Albany Medical Center. Born in Italy, he was the son of the late Giuseppe & Maria Belich Marinzulich. When he was 16, he immigrated to the United States on the Vulcania streamship through Ellis Island in 1936. He was a skilled craftsman, specialized in carpentry, working for Adirondack Staircase, Saugerties until his retirement in 2003. He was also a member of the Local 265 Carpenters Union, United Brotherhood of Carpenters and Joiners of America, Chunski International Group and a member of St. Mary of the Snow Church. He proudly served our country during World War II, having served in the US Army. Tony is survived by a daughter, Margaret Johnson of Glasco, grandchildren, Eric and Edward Johnson, Michael Marinzulich, Tracie Marinzulich (Mora), Gama, Margaret Marinzulich (Roe), Daniel. He is also survived by great grandchildren, Alicia, Dylan, Brandon and Brianne Roe, Ashley, Brandon, and Marisa Marinzulich, Milana and Mikaeo Marinzulich-Mora. He was predeceased by his wife of 54 years, Frances Premus Marinzulich, whom he married on February 10, 1945, a son, Anthony Marinzulich Jr. and two brothers, Joseph and Eugene Marinzulich. Reposing at the Simpson-Gaus Funeral Home, 411 Albany Ave, on Tuesday, May 21, 2013 from 2-4 and 7-9pm. A Funeral Mass will be celebrated on Wednesday, May 22, 2013 at 10:30 AM at St. Mary of the Snow Church in Saugerties. Interment will follow in St. Raymond's Cemetery in the Bronx. In lieu of flowers, memorial donations may be made to Wounded Warrior Project via www. woundedwarriorsproject.org/donate
To order memorial trees or send flowers to the family in memory of Anthony Marinzulich, please visit our flower store.

St. Mary of the Snow