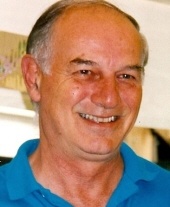 Anthony T. Dalbo, Sr, 77, of Kingston, died Tuesday, August 2, 2016 at Golden Hill Nursing and Rehabilitation Center. Born in Poughkeepsie, he was a son of the late Thomas & Jennie Todaro Dalbo. Anthony was a veteran of the US Airforce. He worked at IBM for over 30 years and was a member of the Quarter Century Club. He loved golfing and cars, especially Cadillacs. Anthony was a devoted family man and was a gentleman's gentleman. Anthony was survived by his wife of 52 years, Bertha Ducote Dalbo of Kingston, whom he married on August 17, 1963, four children, Lisa Feeney and her husband Sean of Kingston, Anthony T. Dalbo, Jr of Kingston, Eric Dalbo and his wife Amy of NY, NY and Jason Dalbo and his wife Shannon of Fort Lauderdale, FL, four siblings, John Dalbo and his wife Patricia of Cary, NC, Michele Dalbo of Poughkeepsie, Thomas Dalbo and his wife Frances of Hyde Park, Timothy Dalbo and Lynn Doyle of Poughkeepsie, six grandchildren, Matthew, Samuel, Anthony III, Aliyah, Angelina and Michael. Several nieces, nephews, aunts and cousins also survive. In addition to his parents, Anthony was predeceased by his sister, Frances Dalbo. Anthony will be reposing at the Simpson-Gaus Funeral Home, 411 Albany Ave on Friday, August 5, 2016 from 4-8 PM. The funeral procession will form from the funeral home on Saturday at 11:00 AM. A Funeral Mass will be celebrated at 12:00 noon at St. Joseph's Church, with Fr. Frank Damis, officiating. Interment with military honors by the Joyce Schirick Post 1386 will follow in St. Mary's Cemetery.
To order memorial trees or send flowers to the family in memory of Anthony T. Dalbo, Sr., please visit our flower store.