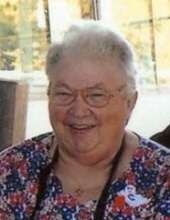 Born in Saugerties, she was a daughter of the late Leonard & Dorothy Geary Wolven. Beverly was a graduate of Kingston High School and Sheddans Beauty Academy in Newburgh. She enjoyed working as a 4H Leader, Cub Scout Leader and Girl Scout Leader and working with all kinds of crafts. She was very involved as the Treasurer of the New York State Navy Seabee Auxiliary, Treasurer of The Navy Seabee Island X-9 Auxiliary and Treasurer of the Town of Kingston Senior Citizens.

A Memorial Service will be held on Thursday, January 3, 2019 at the Hurley Reform Church at 11:00 AM.
Entombment of Beverly’s cremated remains will follow in the Hurley Reformed Church Columbarium.

Simpson-Gaus Funeral Home, 411 Albany Ave is honored to assist the family with the arrangements.
To order memorial trees or send flowers to the family in memory of Beverly L. Chrisey, please visit our flower store.