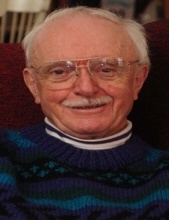 Brian Sunners, 84, of Lake Katrine, died Tuesday, April 18, 2017 at Ten Broeck Commons. Brian was born in Liverpool, England, the son of the late Henry & Frances (Connolly) Sunners. Brian grew up in Edinburgh, Scotland where he attended Edinburgh University obtaining a PhD in Chemistry. In 1957, at Blackhall Church in Edinburgh, he married Anne. Upon completion of his Doctorate, they moved to Ottawa, Canada. He obtained a fellowship to work at the National Research Council of Canada, a governmental research organization. After two years, he was recruited by IBM in Poughkeepsie. He spent the next thirty years working for IBM in a variety of capacities and in a variety of areas. During his tenure, he received many individual and group patents. He enjoyed the range of his work and the relationships he developed with this colleagues; relationships that continued until his death. Brian retired at the age of 59, beginning part II of his life; and he never looked back at work. He spent close to the next 20 years hiking, biking, and traveling. He participated in these activities with a close knit group of friends. He and his friend and companion Angie spent many months, most years traveling to many exotic places. He truly enjoyed his retirement. Brian is survived by his two children, Alan and his wife Laura of Coopersburg, PA and Liz and her partner Tracilyn of Newburgh, three grandchildren, Amanda, Meghan and Alec, two nieces, Pam and Carolyn and one nephew, Mike. He was pre-deceased by his younger brother Donald, as well as, his sister-in-law, Eleanor. The funeral service and interment for Brian were held privately. The family will be holding a celebration of his life on June 10th at 1:00pm at the Hudson River Maritime Museum in Kingston. The family invites you to help celebrate his life. The family sincerely thanks the staff at Ten Broeck Commons for the care and respect they gave their father, father-in-law, and granddad over the past six years. Simpson-Gaus Funeral Home, 411 Albany Ave, is honored to assist the family with the arrangements.
To order memorial trees or send flowers to the family in memory of Brian Sunners, please visit our flower store.