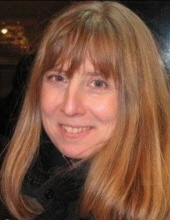 Carolyn E. Dwyer, 59, of Kingston, died Sunday, November 16, 2014 at her home. Born in Albany, NY, she was a daughter of Mary Tugas Dwyer of Kingston and Robert H. Dwyer of Venice, FL, who preceded her in death. She is also survived by her stepmother, Mary W. Dwyer of Venice, FL. Carolyn owned and operated a clothing store, "Carioca", in the East Village of New York City from 1975-1985. She taught pattern-making and millinery at Parsons School of Design for nine years. She also taught the same course at Marist College. Carolyn then worked at Tonner Doll Company in Kingston from 1999 to 2012. An accomplished writer, she was an active member of the Health Alliance Oncology Memoir Group, and her work appears in their "Holding on, Letting Go," an anthology. Prior to her death, she completed and published her full length memoir entitled "Enough". Carolyn is survived by a son, Michael Pistone and his wife, Sara of Highland, NY; a daughter, Dana Pistone of Kingston; former husband, Charles Pistone of Kingston; two sisters, Mary (Christine) Kasson and her husband, Kurt, of Smithville, Texas and Constance Heiden and her husband, Richard, of Lancaster, Pennsylvania; two brothers, Robert Dwyer of Astoria, NY, and Matthew Dwyer of Oakland, California. Many nieces, nephews, grandnieces and grandnephews also survive. A memorial service will be held at St. John's Episcopal Church on Saturday, November 22, 2014 at 12:00 noon. The family requests that, in lieu of flowers, memorial donations be made to the "Oncology Support Program" or "Breast Cancer Care Program", c/o HealthAlliance, 80 Mary's Ave., Kingston, NY 12401.
To order memorial trees or send flowers to the family in memory of Carolyn E. Dwyer, please visit our flower store.