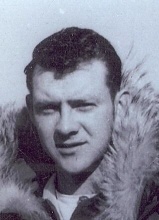 Charles F. DuBois of Kingston died Monday, July 22, 2013 at the Albany Stratton VA Medical Center. He was 83. A lifelong Kingston resident, he was a son of the late Edward C. and Marguerite C. Middagh DuBois. A Kingston High School graduate he then worked at Hucktrol. A Corporal in the US Army during the Korean War, Charles returned to Kingston and worked for many years at Callanan's. He was an avid hunter, fisherman, marksman, dog lover and boater. Loving brother of Angela Baker of West Hurley, Jacqueline Schwartz of Town of Ulster and the late Shirley Smith and Marjorie DeCicco; brother in law of Donald Smith Sr., Gary Lee Schwartz and the late Frederick "Skip" Baker and George DeCicco, Sr.; uncle of the late George DeCicco, William Michaels, Sr. and Robert Vedder, Sr. Many nieces and nephews survive. Reposing at the Simpson Gaus Funeral Home, 411 Albany Ave. on Friday from 6:00 8:00 pm. A Funeral Service will be conducted on Saturday at 11:00 am at the funeral home. Rev. Leroy Ness will officiate. Interment, with military honors by Joyce-Schirick Post 1386 will be in Montrepose Cemetery. Memorial contributions may be made to Make-A-Wish Hudson Valley, 832 South Broadway, Tarrytown, NY 10591 or St. Jude Children's Research Hospital, 262 Danny Thomas Place, Memphis, TN 38105.
To order memorial trees or send flowers to the family in memory of Charles F. DuBois, please visit our flower store.