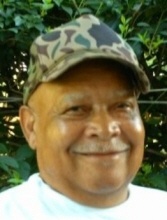 Charles Gaunt, 79, of Kingston, entered into eternal peace on Sunday, March 6, 2016 at Albany Medical Center with his family at his side. Born in Tallassee, AL, he was a son of the late Clarence & Mary Lou Smith Gauntt. Charlie was an avid follower of sports and politics. He enjoyed trips to the casino, but most of all he enjoyed spending time with his family. Charlie "Poppy" was known for his lovingly humorous nature. Charlie is survived by his soul mate, Deborah Palmer-Gaunt of Kingston, five children, Alfreda Morris of Kingston, Denise Brown of Kingston, Sherry Gaunt of Warren, OH, Charles Gaunt and his wife Terry Lynn of Kingston, Mark Gaunt of Wind Gap, PA, two stepsons, Kevin Brown of Kingston and Carl Brown of Glasco, three siblings, Eddie Gaunt of Tallassee, AL, Lester Smith of Tuskegee, AL and Douglas Smith of Atlanta GA, 14 grandchildren, 18 great grandchildren and 2 great great grandchildren. Many nieces and nephews also survive. In addition to his parents, Charles was predeceased by a son, Eric Tobler, five siblings, Clarence Gauntt, Evelyn Kelly, Gladys Cunningham, Lavelle Reed and Edith White. Charlie will be reposing at the Simpson-Gaus Funeral Home, 411 Albany Ave. on Thursday, March 10, 2016 from 4-8PM. Interment will be held privately. The family requests that in lieu of flowers, memorial donations be made to the Multiple Myeloma Research Foundation, 383 Main Avenue, 5th Floor, Norwalk, CT 06851.
To order memorial trees or send flowers to the family in memory of Charles Gaunt, please visit our flower store.