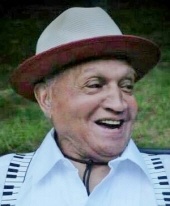 Daniel "Danny" Fitzgerald, 83, native of Kingston, NY, died Monday, February 6, 2017 at Golden Hill Nursing & Rehabilitation Center. Born in Kingston, he was a son to the late Chester Grant & Gertrude Brown Fitzgerald. Danny was a world traveler, legendary street performer and founder of the "Lost and Wondering Blues Band". He is well known and admired by his friends and fans all around the world and has left a mark in musical history in places like New York City, Germany and Paris. Danny is survived by his son, Daniel Loechner of Stuttgart, Germany, a sister, Cheryl Robinson of Boyton Beach, FL. Several nieces and nephews, cousins and many friends worldwide also survive. In addition to his parents, Danny was predeceased by nine siblings, James Fitzgerald, Dorothy Green, Eugene Fitzgerald, Herbert Fitzgerald, Sandra Snyder, Donald Fitzgerald, Elizabeth Fitzgerald, Madeline Griffith and Brenda Waldemar. Danny will be reposing at the Simpson-Gaus Funeral Home, 411 Albany Ave on Saturday, February 11, 2017 from 12:00 noon and 1:00 PM. A celebration of Danny's life will be held at 1:00 PM at the funeral home. Interment with military honors by the VFW Joyce Schirick Post 1386, will follow in Wiltwyck Cemetery.
To order memorial trees or send flowers to the family in memory of Daniel "Danny" Fitzgerald, please visit our flower store.