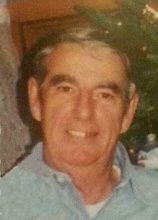 Daniel B. Elkins, 77, of Lake Katrine, died September 30, 2014 at Ten Broeck Commons Nursing Home. Born in Plattsburgh, NY, he was a son of the late Arthur & Jane Leggett Elkins. Daniel was a bus driver with the Arrow Bus Line in Tilson. He enjoyed music, painting, learning, bargain hunting and working with his hands, but most of all he enjoyed the time he spent with his family. He was full of life and had a witty sense of humor. He is survived by his four children, Danielle Barrie and her husband Hamish of West Hurley, Barbara Elkins of South Carolina, Daniel Elkins of Lake George and Jonathan Elkins and his wife Lynn of Spring Glen, one brother, John Elkins and his wife Edith of Bloomington. Many grandchildren and many nieces and nephews also survive. Daniel is predeceased by a brother, Walter Elkins and a sister Olive Elkins. Daniel will be reposing at the Simpson-Gaus Funeral Home, 411 Albany Ave, on Thursday, October 2, 2014 from 7-9 PM. Interment will be privately held.
To order memorial trees or send flowers to the family in memory of Daniel Elkins, please visit our flower store.