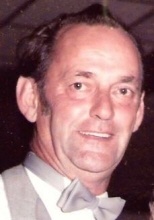 Donald P. "Nippy" Jones of Mary Ave., Lake Katrine died Sunday, November 11, 2007 at Kingston Hospital. He was 72. He was born August 14, 1935 in Kingston, a son of the late Percy and Julia Buckman Jones. A graduate of Kingston High School, he played football and baseball, later playing in the Boices Dairy League. He played in the Old Timer's League and was inducted into the Kingston City Baseball Hall of Fame in 1991. Mr. Jones worked for Delaval in Poughkeepsie and then, for many years, as a blaster for Hudson Cement until its closing. He later worked security for Saugerties Lumber. Surviving is his wife, Louise T. Guido Jones whom he married June 10, 1956 and four daughters, Luanne McCoubrey and her husband Sam of Kingston; Donna Ferrendino and her husband Michael of Kingston; Sheila Beesmer and her husband Bob of Saugerties and Julie DeVuono and her husband Frank of Pittsburgh, PA. Also surviving are five grandchildren, Sam and Stephanie McCoubrey, Kelly Beesmer, Michael Ferrendino, Ava Theresa DeVuono and a great-grandchild, Zacery Craig. Many nieces, nephews and cousins also survive. A sister, Marjorie Robinson died previously. Reposing and the Simpson-Gaus Funeral Home, 411 Albany Ave., Kingston on Tuesday from 2 - 4 and 7 - 9 pm. The funeral procession will form on Wednesday at 8:45 am at the funeral home and process to St. Colman's Church in East Kingston for a 9:30 am Funeral Mass. Interment will follow in St. Mary's Cemetery.
To order memorial trees or send flowers to the family in memory of Donald P. Jones, please visit our flower store.