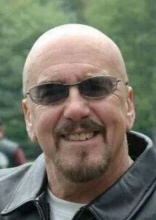 Dooner (Warren) E. Vining, 67, of Stone Ridge, died February 21, 2014 at HealthAlliance Hospital Broadway Campus. Born in Kingston, he was a son of the late Warren G. & Theresa Ferro Vining. For 40 + years, Dooner played drums and sang in numerous bands in the area. He and his wife owned several "watering holes" throughout the years. He loved to ride and paint motorcycles, and was the founding patriarch of Two Wheels for Life motorcycle group. If you knew Dooner, you loved Dooner. He was the kind of guy that would bust your chops relentlessly in good fun, or give you the shirt off his back if you were in need. He is survived by his wife of 44 years, Teresa Godfrey Vining of Stone Ridge, five children, Melissa Vining-Sweeney and her husband Joseph of Kingston, Todd Vining and his wife Narkis of Accord, Kristy Vining-Mitchell and her fiancee Dominic Ausiano of Kingston, Teresa Vining-Carlucci and her husband Jason of Stone Ridge, Heather Vining and her fiancee Michael Lamphere of Stone Ridge, a sister, Mahala Ledsome of Oklahoma, two aunts, Marie Bence Dailey of Kingston and Rose Demetrio of Santa Monica, CA, one uncle, John Ferro of Kingston, ten grandchildren, Meredith & Cameron Sweeney, Joshua, Christopher, Chad, Nicholas, Suly, and Kiara Vining, Dominic and Carmine Carlucci, his brother and sister in laws-Claude Godfrey, Tim Godfrey, Mary Sandoval and Kathy Irwin, his lifelong dear friend, Jean Marie Perry Sangi of Kingston and several nieces and nephews also survive as well as numerous, numerous loving friends. Reposing at the Simpson-Gaus Funeral Home, 411 Albany Ave, on Tuesday, February 25, 2014 from 3-8 PM. A funeral service will take place on Wednesday at the funeral home at 11:00 AM. In lieu of flowers, the family requests that memorial donations be made to the family funeral fund at: www.gofundme.com/72rix8.
To order memorial trees or send flowers to the family in memory of Dooner (Warren) Vining, please visit our flower store.