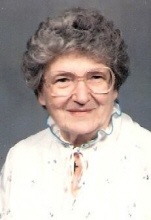 Elsie Marie Nessel of Old Kings Highway, Lake Katrine died Tuesday, September 27, 2011 at her home. She was 95. She was born in the Bronx, a daughter of the late John and Mary Ahlback Smedman. Elsie married William G. Nessel on June 26, 1938 in the Congregational Church in the Bronx. They moved to this area in 1950. For many years Elsie worked as a seamstress in area garment factories. An avid crocheter, Elsie made over 300 lap robes for area nursing homes. She belonged to the Women of the Moose and received their College of Regents Degree. Elsie belonged to the High Woods Reformed Church and the A.H. Wicks Ladies Auxiliary. Beloved wife of William G. Nessel who died October 20, 2004; loving mother of Lorraine Snyder of Lake Katrine and her husband, the late Roger Snyder, Eileen Nickerson of Tillson and her husband William E. Nickerson; grandmother of William and Erik Snyder, John William Nickerson and Kristina Kafel; great grandmother of Christopher John Snyder, Erica and Patrick Snyder, Jonathan and Matthew Kafel; sister of Ida Rhoden of Rifton and the late Jean Borucinski, Walter, Edward and Wilmont Smedman. Many nieces and nephews also survive. Reposing at the Simpson - Gaus Funeral Home, 411 Albany Ave. on Thursday from 2-4 and 7-9 PM. The Funeral Service will be conducted on Friday at 12:00 at the funeral home, Rev. Terrence O'Brien will officated. Interment will follow in Wiltwyck Cemetery. Memorial contributions may be made to the High Woods Reformed Church, 1290 Church Rd., Saugerties, NY 12477.
To order memorial trees or send flowers to the family in memory of Elsie Marie Nessel, please visit our flower store.