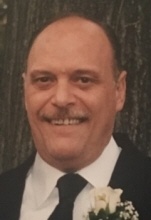 Frank A. Barresi, 68, of Kingston, died Wednesday, February 28, 2018 at HealthAlliance Hospital Broadway Campus. Born in the Bronx, he was a son of the late Anthony & Catherine Donovan Barresi. Frank was a veteran of the US Navy having served during the Vietnam War. He was a 20 - year veteran of the New York City Police Department where he achieved the rank of sergeant. After his retirement he enjoyed working as an undercover officer, but most of all he enjoyed spending time with his family. Frank is survived by five children, Frank Barresi and his wife Annmarie of Pearl River, NY, Kim Mirro and her husband Lou of Nanuet, NY, Schewana Barresi of Kingston, Anthony Barresi of Kingston and Briana Barresi of Kingston, six grandchildren, Ashley, Frankie, Louie, Michael, Joey and Vinny. Two ex-wives, Diane Keeley, Sharon Barresi and many nieces and nephews also survive, as well as his best furry friend, Cujo. In addition to his parents, Frank was predeceased by a son, Christopher and three siblings, Richard Barresi, Sis Roscigno and Anthony Barresi. Frank will be reposing at the Simpson-Gaus Funeral Home, 411 Albany Ave on Sunday, March 4, 2018 from 2-5 PM. The funeral procession will form from the funeral home on Monday at 9:00 AM. A Funeral Mass will be celebrated at 10:00 AM at St. Marys Church. Inurnment of Franks cremated remains in the veterans section of New Paltz Rural Cemetery will take place at a later date.
To order memorial trees or send flowers to the family in memory of Frank Barresi, please visit our flower store.