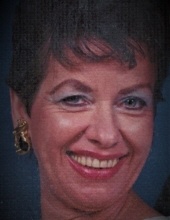 She was born in New York City

In addition to her parents, Gail was predeceased by a son and a sister, Carol Vlock.

The family will receive friends for a memorial gathering at the Simpson-Hammerl Funeral Home on Monday, August 23, 2021, from 4-7 PM.

Interment will be privately held.

Simpson-Hammerl Funeral Home is honored to assist the family with the arrangements.
To order memorial trees or send flowers to the family in memory of Gail Rappeport, please visit our flower store.