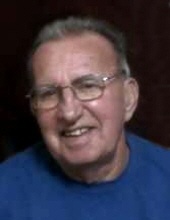 Born in Kingston, he was a son of the late Peter & Mary Kidney Wenzel. His routine included trips to Dunkin Donuts and Dallas Hot Weiners on Broadway. Gerald was a New York Yankee fan who enjoyed sitting on his swing and watching the world go by.

Gerald is survived by his two children, Peter Wenzel and his wife Dede of Saugerties and Cindy Wenzel and her partner, Rickey Yonnetti of Kingston. Six grandchildren, eight great grandchildren and several nieces and nephews also survive.

In addition to his parents, Gerald was predeceased by his wife Patricia Sepesy Wenzel, who died in 2008. He was also predeceased by three brothers and two sisters.

A Funeral Mass will be celebrated at 10:00 AM at Immaculate Conception Church.

The family requests that memorial donations be made to the Town of Saugerties Animal Shelter, 1765 NY-212, Saugerties, NY 12477.
To order memorial trees or send flowers to the family in memory of Gerald Wenzel, please visit our flower store.