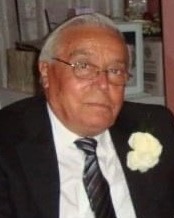 Harry Savva, 89, of Kingston, NY passed away peacefully surrounded by his family on December 1, 2022. He will be remembered for his gentle spirit and endless devotion to his family and friends.

Born on April 30, 1933 in Tochni, Larnaca, Cyprus, he was the son of the late Savva and Evengina Antoniou. He had three siblings, Antonis, Costas and Adelphothea. Costas still resides in Rhodes, Greece.

Harry married his wife of 67 years, Angela Loizou, on October 30, 1955 in Tochni and they had three children. Harry came to the United States in pursuit of the American Dream in March of 1971. He worked at the Park Diner and a local gas station in Kingston, NY to be able to save enough money to bring his family into a warm and inviting home. He was finally able to do so in October of 1971 when they joined him here in Ulster County and they have been ever since.

Through hard work and dedication, Harry and his family purchased the Villa Carmella in Kingston in 1981. Being across from the main post office, the Villa Carmella became a social hub where endless people would come for even a simple coffee and smile from Harry. His grandchildren fondly remember his elaborate breakfasts made with an abundance of love and admiration.

Harry never forgot his homeland, and eventually built a vacation home in Tochni, Cyprus for his entire family to enjoy. It created the perfect connection to the past for future generations. He and Angela spent summers there anxiously waiting to host their children, grandchildren, great grandchildren, family, friends and neighbors.  Harry would enjoy his afternoon walks to the “kafenio” where he would socialize with fellow villagers over coffee and backgammon. Harry continued to enjoy a full life traveling between the United States and Cyprus and was always surrounded by the same love and warmth he gave off into the world.

Harry was particularly talented in poetic dueling, or “Tsiattista.” He created and sang the most beautiful lyrics during traditional Cypriot pre-wedding ceremonies. He was able to share his gift during all of his children’s and grand children’s weddings, as well as extended family members and friends. His talent was known throughout several villages in Cyprus.

Arrangements entrusted to Keyser Funeral & Cremation Service, Kingston, NY. The family will receive their friends on Monday December 5, 2022 from 10am to 11:30am at St. George Greek Orthodox Church, 294 Greenkill Ave, Kingston, NY 12401. The funeral service will take place at 11:30am with burial following in Montrepose Cemetery, Kingston, NY.

In lieu of flowers the family suggests memorial contributions be made to St. George Greek Orthodox Church, 294 Greenkill Avenue, Kingston, NY 12401, where Harry was a proud parish member. A tribute for Harry can be found at www.KeyserFuneralService.com, where you may leave memories and expressions of sympathy for his family.

To order memorial trees or send flowers to the family in memory of Harry Savva, please visit our flower store.