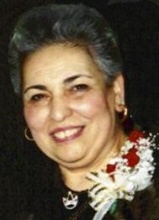 Joan M. DeCicco Beckwith, formerly of Clifton Avenue, Kingston, passed away peacefully on Thursday, November 24, 2005 after a very short illness and a broken heart. She was 71. Born Oct. 1, 1934 in Kingston to Mary H. (Spadafora) DeCicco and the late Michael J. DeCicco. Mrs. Beckwith received her Bachelor of Science in Business Education from Rider College and Master of Science in Business from Central Connecticut State College. She proudly prepared thousands of young people for careers as professional secretaries throughout her 30+ years as a Business Professor at Ulster County Community College. She is often remembered by former students for her “tough love” approach to teaching, which has forged many special relationships with her former students. Mrs. Beckwith had the honor and pleasure of meeting and marrying her best friend, Charles H. 'Chuck' Beckwith on Feb. 27, 1960. Together they were a team who worked to make a real difference in this community. The team became one when the 44-year love affair they shared ended with the loss of Mr. Beckwith on Feb. 23, 2004. Mrs. Beckwith was an avid volunteer in many areas. She was Co-Executive Director of the former Miss Ulster County Scholarship Program for 14 years, raising thousands of scholarship dollars for young women in Ulster County. She also spent 14 years as a member of the Hudson Valley Senior Residence Board of Managers. She was also a good sport, coaching at Kingston American Little League through several long, hot summers. Mrs. Beckwith was also honored by the YWCA as a “Woman of Distinction” for her many works in the education community. She was a parishioner at St. Joseph’s Church. Mrs. Beckwith is survived by her very dedicated mother, Mary H. (Spadafora) DeCicco of Kingston. She leaves her three daughters, Michele J. Artist and her husband Thomas of Kingston, Catherine “Cay” M. Martin and her husband James of Ellington, CT, and Mary R. Beckwith, also of Kingston. Joan is survived by two “perfect” grandchildren, Cassandra Artist of Kingston, and Reid Martin of Ellington, CT, and several very special aunts, uncles, cousins and her caring friend Muriel. She will be missed by her five grand-dogs. Reposing at Simpson-Gaus Funeral Home, 411 Albany Ave., on Sunday 2 to 4 and 6 to 9 PM. The funeral will be held Monday at 9:15 from the funeral home. A Funeral Mass will be celebrated at St. Joseph’s Church at 10:00 a.m. Entombment will be in Wiltwyck Community Mausoleum. The family asks that in lieu of flowers, you make a contribution to a charity special to you, in Joan’s name.
To order memorial trees or send flowers to the family in memory of Joan Beckwith, please visit our flower store.