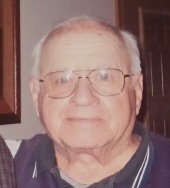 John J. Berardi, 95, a lifelong resident of Kingston, died Wednesday, December 28, 2016 at his home surrounded by his family. Born in East Kingston, he was a son of the late Frank & Mary Nardi Berardi. He was a veteran of WWII, having served in the in the 7th Army - Air Force in the Central and Western Pacific Theater of Operation. He flew 40 combat missions as a radar observer and gunner on a B-24 Heavy Bomber. He attained the rank of T/Sgt and was awarded the Distinguished Flying Cross and Air Medal with 6 oak leaf clusters. John first worked for the former Pilgrim Furniture Co., Kingston. He was an accomplished upholsterer and for many years conducted business under the name of J.J. Upholstery. For 20 years he served as lieutenant for the Kingston Professional Fire Department, before retiring in 1978. John was a member of the V.F.W. Joyce-Schirick Post 1386 and the American Legion, Post 150. He enjoyed baseball, hunting, bowling, golf and the outdoors in the Catskill Mountains. Most of all John enjoyed spending time with his family. John is survived by two children, Joanne Edelstein and her husband Robert of Ocala, Florida and Frank Berardi and his wife, MaryLou of Kingston, one daughter in law, Patricia Berardi, a sister, Lee Finkle of New Paltz, five grandchildren, Michael Edelstein and his wife Sarah, Carol Edelstein and her wife, Jennifer Bame, Leta Carlson and her husband Christopher, John J. III, and his wife, Jayme, Peggy Ann Heitzman and her husband, John and six great grandchildren, Alexis, Evan, Isabelle, Austin, Garrett and Micah Berardi. Many nieces and nephews also survive. In addition to his parents, John was predeceased by his wife, Edith "Peggy" Appa Berardi, a son, John Berardi, Jr., seven siblings, Charles Berardi, Theresa Berinato, Joseph and Amelio Berardi, Emma Nalepa, Vincent and Louis Berardi and one great grandson, John Heitzman. John will be reposing at the Simpson-Gaus Funeral Home, 411 Albany Ave., on Friday, December 30, 2016 from 3-7 PM. A Funeral Service will be held on Saturday at the funeral home at 11:00 AM with Fr. Thomas Berardi, officiating. Interment with military honors by the V.F.W. Joyce-Schirick Post 1386 will follow in St. Mary's Cemetery. The family requests that memorial donations be made to Hudson Valley Hospice, 400 Aaron Ct, Kingston, NY 12401.
To order memorial trees or send flowers to the family in memory of John J. Berardi, please visit our flower store.