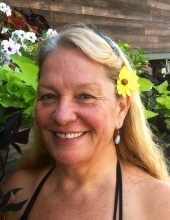 Born in Queens, NY, she is the daughter of David & Meredith (Ward) Cataffo of Havelock, Ontario, Canada.

Áine was a dreamer. She believed the world could be a peaceful place with everyone living as one. A pioneer for women’s rights and social justice, she promoted the once radical idea of natural child-rearing and holistic living and fought for equal rights for all. A dedicated wife and mother, Áine valued the importance of a loving and magical home. As an inter-faith minister and spiritual guide, Áine created and welcomed everyone into a safe space where each person’s individuality was accepted and nurtured. A naturalist and Mensa lecturer, Áine was one of the first women falconers in NY State. A protégé of Dr. Heinz Meng, Áine founded Return to the Wildwood, a wildlife education program for children, promoting a relationship with the magic of nature, environmental awareness, and conservation. As a musician, Áine founded the Celtic band “Aisling” (meaning dream vision) spreading light and love through music and song for 25 years. Áine’s latest dream brought her to Culebra, Puerto Rico where she spent her final years and became a bright light in the tight-knit, island community.

Áine is survived by her husband of 37 years, Alfred Havrilla of Kingston, NY and Culebra, PR; three daughters, Jennifer Havrilla of Kingston, Amanda Kenney and her husband Keith of New Paltz, NY and Annabelle Havrilla and her partner Nestor Romero of Culebra, Puerto Rico; and daughter of the heart Kelly Ulrich. Áine is predeceased by her son, Jesse Lee. She is survived by her three sisters, Catherine Cataffo of Medford, New Jersey, Susan Heiland and her husband Scott of Milford, NY, Dana Rollwage and her husband Douglas of Prince Edward Island; three grandchildren, Ainsley, Rohan and Sage; and several nieces and nephews.

A Celebration of Life for Áine will be announced by the family.

The family requests that memorial donations be made to the Jane Goodall Institute at 1595 Spring Hill Road, Suite 550, Vienna, VA 22182.
To order memorial trees or send flowers to the family in memory of Judith “Áine” Havrilla, please visit our flower store.