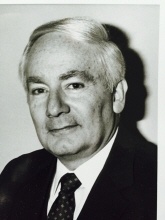 Len Cane, 85 of Kingston, died Wednesday, May 20 2015 at HealthAlliance Hospital Broadway Campus. Born in Brooklyn, he was a son of the late Samuel & Sarah Wasserstein Cohen. A veteran of the United States Army, Mr. Cane served in the Far East during the Korean Conflict.An area resident for over 48 years, Mr. Cane was a noted leader in the community as well as a MC/speaker for many groups over the years and a respected humorist. Mr. Cane dedicated much of his life to serving the people of the Hudson Valley. He was President of the Ulster County Regional Chamber of Commerce for 34 years from 1969-2003. Prior to his Chamber career he was in the radio and television industry for 16 years, working in New York and Vermont. Mr. Cane was a past President of the Chamber Alliance of NY State and the Mid-Atlantic Chamber of Commerce Executives. He was a graduate of the Institutes for Organization Management, a national continuing education program for professional managers. He served as a five-time class advisor, a member and chairman of the Board of Regents, which oversees the program, and was a member of the professional faculty for 11 years, instructing at Syracuse University, University of Delaware and Notre Dame. One of its three founders, Mr. Cane is Past President of the Ulster County Development Corporation, for which he served more than 25 years on its board. He was also the Corporation's Permanent Secretary until his retirement. Mr. Cane served a 5 year term on the Kingston City Schools Board of Education, including one term as president. He was elected to the Ulster BOCES Board of Education in 1983 and continued to serve there until he retired in 2015. For 5 years he served as its Board President. He was elected President of the Ulster County School Boards Association in 2004 and ultimately served as president for 3 years. In March 2003 Mr. Cane was honored as New York State's Small Business Advocate of the Year by the Business Council of NY State, the National Federation of Small & Independent Business and the Chamber Alliance. In 2002 Ulster County Community College honored him as one of its" Community of Stars" and that same year Mr. Cane received the Distinguished Service Award from the NYS School Boards Association, naming him the Outstanding School Board Member in the State. In 1996, Mr. Cane was named the Outstanding Chamber of Commerce Executive in NY State by his colleagues. Mr. Cane served on the Board of Directors of the Ulster County School to Work Partnership and on the Advisory Board for Junior Achievement. He was a charter member and one of the original organizers of the Ulster County SCORE Chapter. His past affiliations and board memberships included service with Benedictine Hospital, the Kingston Library and the Kingston Lions Club. For his decades of dedicated service to the Hudson Valley community, Mr. Cane was honored with the 2004 Saint Cabrini Home Gold Medal Human Service Award. He also received the highest community award given to a non-Boy Scout member. He is survived by his wife of 56 years, Lee Freedman Cane of Kingston, whom he married on September 27, 1958, his son, Craig Cane of Kingston and his granddaughter Melanie Cane of Kingston. The family will receive friends at the Simpson-Gaus Funeral Home, 411 Albany Ave., on Friday May 22, 2015 from 2-4 PM & 7-9 PM. Funeral service and interment will be privately held. In lieu of flowers, contributions may be made to Ulster BOCES, 319 Broadway, Port Ewen, NY 12466, in memory of Len Cane for the nursing program scholarship.
To order memorial trees or send flowers to the family in memory of Len Cane, please visit our flower store.