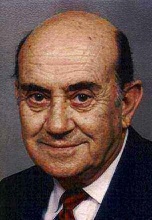 Leo R. Notari of DeWitt Mills Road, Hurley, NY died Wednesday morning at the Benedictine Hospital. He was 81. Leo was born in Old Forge, PA on August 13, 1924, a son of the late Frank and Candida Mancia Notari. A Class of '42 graduate of Old Forge High School, he then received an Electrical Engineering degree from Penn State. He was a life member of the Penn State Alumni Association a member of the local chapter. He served in the US Army 66th Division during WW II in the European Theatre of Operations. He was awarded a Bronze Star. Leo belonged to the Panther Veteran Organization. He married Ruth MaKibbin on April 28, 1950. After returning from service in 1951 Leo began working with I.B.M. in Philadelphia. Over 35 years he traveled worldwide for numerous projects. In 1960 he settled in this area and worked for I.B.M. in Kingston and Poughkeepsie. A member of the Quarter Century Club, he retired in 1986. A parishioner of St. Joseph's Church, he served as a Eucharistic Minister and was among the first group of Lectors in the parish. He served on the Governor's Council for the Aging and was a Health Information, Counseling and Assistance Program Coordinator for the Ulster County Office for the Aging. In 2004 he received the 'Pride of Ulster County' in recognition of being named 'Senior Citizen of the Year.' A member of R.S.V.P., Leo volunteered at the Golden Hill Health Care Center. A former board president of Ulster Literacy, he has been active since 1986. Leo was a former member and past president of the Hurley Lions Club. His daughter Lisa M. Notari died October 9, 2001. One sister Ada Notari and one brother John Notari both died previously. Surviving are his wife of 55 years, Ruth Notari; one daughter Lucinda A. Notari of Kingston; one sister Libia Taroli of Lancaster, PA, many nieces and nephews. There will be a gathering of family and friends on Sunday from 3:00 – 6:00 PM at Simpson – Gaus Funeral Home, 411 Albany Ave., Kingston. On Monday a Funeral Mass will be celebrated at St. Joseph’s Church, Kingston at 10:00 AM. Inurnment will follow in Hurley Cemetery. Contributions in Leo’s memory may be made to Ulster Literacy Assoc., Inc., 635 Broadway, Kingston, NY 12401; Golden Hill Health Care “Activities Fund”, 99 Golden Hill Dr., Kingston, NY 12401 or to any form of Katrina Relief.
To order memorial trees or send flowers to the family in memory of Leo R. Notari, please visit our flower store.