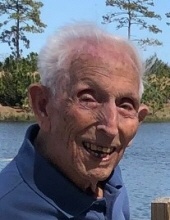 Louis Charmello, 97, of Ruby, formally of Kingston, died on Friday December 25, 2020 peacefully at his home, surrounded by family.

Born in East Kingston, he was the son of the late Carmine & Angeline DiCicco Charmello.Loius was a great provider and was always putting his family first. He enjoyed camping with his wife Elizabeth in Lake George and traveling year after year. He was a devout Catholic and a lifelong parishioner of St. Mary’s Catholic Church. He was a veteran of The US Army, having served during WWII.

One of Louis favorite activities was walking. Not only did he walk to work and home every day he continued to walk several miles a day into his retirement. Louis was beloved by many and had a way about himself that would light up a room the moment that he entered it. Christmas was Louis’s favorite holiday and it could be seen from the extensive decorations that he would put up on the exterior and the interior of his home. So much so that the Daily Freeman would put up yearly pictures of his decorations.

The funeral procession will form from the funeral home on Wednesday at 9:00 AM.

A Funeral Mass will be celebrated at 10:00 AM at St. Mary’s Church.

In lieu of flowers, the family requests that memorial donations be made to Hudson Valley Hospice, 400 Aaron Court, Kingston, NY 12401.

Simpson-Hammerl Funeral Home is honored to assist the family of Louis with the arrangements.
To order memorial trees or send flowers to the family in memory of Louis Charmello, please visit our flower store.