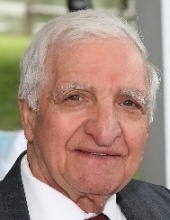 Louis Fuoco died peacefully on Saturday October 10, 2020 in Kingston at the age of 89.
He was always such a social and well liked person who spent the past couple of years at Ivy Lodge in Saugerties. At Ivy Lodge he was best known for being friendly, greeting people in the hallway, enjoying a nightly snack and talking to the residents and staff about his family that he loved so much.

Lou had a special place in his heart for Kingston where he was born and raised. He attended Kingston Schools and was on the Varsity Football Team earning a Varsity letter. Lou worked very hard and kept the balance of going to school, working at the soda shop across from the movie theatre, playing Football and helping to take care of his family. His first act of making money was when the Dayliner pulled into Kingston, him and his friends would dive for coins as people threw them in the River. After High School Lou went on to play football at Hartwick College on a scholarship. As a parent to two sons, Lou continued his love of sports, especially Football, by coaching their Junior Football Teams and being a contributing Board Member.
After Hartwick Lou enlisted in the Marines and traveled all over the world. He served during the Korean War and was stationed in Italy and Africa. Lou proudly served his country from 1952-1954.

Upon his return from the military, he got a job at IBM. He loved working there and worked over 35 years as a Cost Estimator and Business Planner before retiring in 1990.
Lou has always been very active and was an avid skier, boater and golfer. He was a beloved member of Hidden Harbor Yacht Club for many years where he had many friends. The Hudson River was an important part of life from when he grew up on Hanratty Street, to his time as an Adult. He always appreciated the beauty of the River.

When talking about Lou the most important part of life was his family. He married the love of his life Rose Martini in 1956 and they were married over 60 years. They had two sons Louis and Brian and six grandchildren. Both Lou and Rose believed family was the most important part of life. They both came from large families where they were taught that family is everything. They lived that in everything they did. There was no event for the kids or the grandchildren that they didn’t attend. From the smallest classroom play to large graduations or football games, they were there. Lou was also very handy. He built his house and taught Lou and Brian how to build, fix and learn anything. His legacy is all about kindness and the love of his family.

Lou will be reposing at Simpson-Hammerl Funeral Home located at 411 Albany Ave. in Kingston, on Thursday, October 15, 2020 from 5-8 PM.

The funeral procession will form from the funeral home on Friday at 9:00 AM.

All are welcome to attend and celebrate Lou’s life.

Simpson-Hammerl Funeral Home is honored to assist the family of Lou with the arrangements.

In lieu of flowers, you may consider making a memorial donation to Lou’s favorite charity, American Cancer Society.

Online condolences may be left for the family of Lou by visiting www.SimpsonHammerl.com
To order memorial trees or send flowers to the family in memory of Louis F. Fuoco, please visit our flower store.