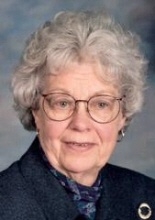 Louise M. Fredenberg, formerly of Lake Katrine, died Wednesday, October 26, 2011 at The Terrace at Eddy Memorial. She was 91. She was born in Stroudsburg, PA a daughter of the late William C. and Rebecca Kauffman Marean. Louise moved to Kingston in 1967 and previously owned the Jennifer Shop, Uptown Kingston. A member of the Hurley Reformed Church, Louise belonged to the D.A.R. and the Kingston Hospital Auxilary. Beloved wife of the late Richard R. Fredenberg who died July 22, 1989; loving mother of Jeffrey M. Fredenberg and his wife Joanne of Hurley and Jennifer L. Fredenberg of Naperville, IL; grandmother of Jason R. Fredenberg and his wife Diana Dorozynski Fredenberg; great grandmother of Jackson and Harrison Fredenberg; sister of the late William C. Marean; aunt of Tara and Matty Mozzor, Curtis and Celeste Marean. Reposing at the Simpson - Gaus Funeral Home, 411 Albany Ave. on Sunday from 3:00 - 6:00 PM. The funeral procession will form at the funeral home on Monday at 9:00 AM. A Funeral Service will be conducted at Hurley Reformed Church on Monday at 10:00 AM, Rev. Charles Stickley will officiate. Interment will follow in Hurley Cemetery. Memorial contributions may be made to Kingston Hospital Foundation, 396 Broadway, Kingston, NY 12401 or to a charity of choice.
To order memorial trees or send flowers to the family in memory of Louise M. Fredenberg, please visit our flower store.