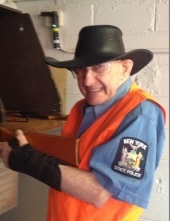 Nick Botsakos, 86, was a longtime resident of New Paltz, New York. He was born on February 20, 1932, in Brooklyn, New York, and passed away on November 5, 2018. Nick was the son of the late Mary and George Botsakos.

Despite his age, Nick’s youthful spirit will forever be remembered by all those who had the pleasure to know him. He was an avid lover of horses, tools and anything to do with The New York State Troopers. Prior to his retirement in 2014, Nick enjoyed carpentry and yard work. Nick enjoyed his retirement and especially his involvement in a volunteering capacity with the Catskill Animal Sanctuary.

Nick is survived by his longtime friends, Betsy Gilson, Rodney Henderson, and their families. He is also survived by many other friends, close acquaintances, and several nieces and nephews. Nick was preceded in death by his four brothers and one sister.

Entrusted to the care of Simpson-Gaus Funeral Home, 411 Albany Ave in Kingston, Nick’s viewing will be held on Monday, November 12, 2018 from 10:00am to 11:00am. A funeral service will take place at 11:00am. Burial will follow at New Paltz Rural Cemetery.
To order memorial trees or send flowers to the family in memory of Nick Botsakos, please visit our flower store.