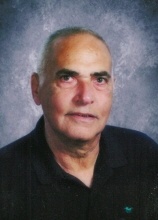 Orlando DeCicco, 77 of Kingston, passed away softly, Monday, January 22, 2018 at Vassar Brother Medical Center surrounded by his loving family. Born in Malito, Italy, he was a son of the late Salvatore & Emilia Fusco DeCicco. Orlando immigrated to the United States in 1951. He proudly became a citizen in 1958. He attended St. Marys School and a 1960 graduate of Kingston High School. Orlando worked for the United States Postal Service in New Paltz for 44 years, retiring in 2002. He was a NY Yankee fan and his favorite football teams were the Ohio State Buckeyes and the Detroit Lions. He was also a huge fan of tennis and golf. Orlando was a member of the Immaculate Conception Church and the Divine Mercy Chapel. Orlandos family was his whole life. All of his activities always revolved around them, whether vacations, sports or special events, he was always there for them. He will be missed by all. Orlando is survived by the love of his life, Regina Zeeh DeCicco, whom he married on December 11, 1961, three children, Selina DeCicco and her partner, Marilyn Keener of Walden, Vincent DeCicco and his wife Mary Ellen of Red Hook, Teresa (Terry) Miles and her husband Ronald of Ulster Park, three siblings, Silvana Dudek and her husband Robert of Kingston, Ralph DeCicco and his wife Pier of South Carolina, Carla Habernig and her husband, James of Port Ewen, four grandchildren, Christopher and Andrea DeCicco, Ronald Miles and his wife Justine, and Joseph Miles, two great grandchildren, Liam and Kade. Many nieces and nephews also survive. In addition to his parents, Orlando was predeceased by two siblings, Frank DeCicco and Rosario DeCicco. Orlando will be reposing at the Simpson-Gaus Funeral Home, 411 Albany Ave on Wednesday, January 24, 2018 from 7-9 and Thursday, January 25th from 2-4 and 7-9 PM. The funeral procession will form from the funeral home on Friday, January 26th at 10:00 AM. A Mass of Christian burial will be celebrated at 11:00 AM at Immaculate Conception Church. Interment will follow in Mt. Calvary Cemetery. The family requests that memorial donations be made to the Adoration Chapel at Immaculate Conception Church, 467 Delaware Ave, Kingston, NY 12401.
To order memorial trees or send flowers to the family in memory of Orlando DeCicco, please visit our flower store.