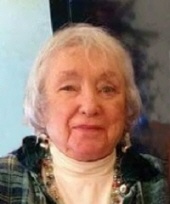 Patricia A. Peck, 76, of Kingston, died peacefully at her home on Tuesday, September 5, 2017. Born in Patterson, NJ, she was a daughter of the late Joseph A. & Cecelia Wassmer Brooks. Patti enjoyed camping. She loved dogs and her cat Josie. She was active with the Pregnancy Support Center, prison ministry and a member of Aglow International. Her grandchildren were her delight. Patti is survived by her three daughters, Mary C. Peck and her husband, Michael Carosella of White Plains, Kathleen Peck Emig of Kingston and Suzanne Fair and her husband, Bryan of Tega Cay, SC, two brothers-in-law, William Glennon and his wife Terry of Kingston and William Peck and his wife, Peggy of Florida, three grandchildren, Zoe, Katerina and Samuel. Two nephews also survive. In addition to her parents, Patti was predeceased by her husband, Robert D. Peck and her sister, Cecelia Glennon. Patti will be reposing at the Simpson-Gaus Funeral Home, 411 Albany Ave on Friday, September 8, 2017 from 2-4 and 7-9 PM. A Funeral Service will be held on Saturday at the funeral home at 10:00 AM. Interment will follow in St. Marys Cemetery. The family requests that memorial donations be made to the American Cancer Society, Memorial Processing, 6725 Lyons St., East Syracuse, NY 13057.
To order memorial trees or send flowers to the family in memory of Patricia A. Peck, please visit our flower store.