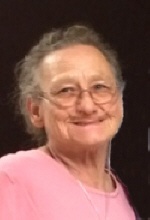 Patricia M. Schwartz, 69, of Rifton, died Sunday, January 1, 2017 at HealthAlliance Hospital Broadway Campus. Born in Kingston, she was a daughter of the late Robert F. & Anna Kilmer Dugan. Patricia enjoyed camping, bowling and family gatherings, especially the Sunday family breakfasts. Patricia is survived by her husband of 40 years, David A. Schwartz of Rifton, whom she married on October 24, 1976, a son, David F. Schwartz of Ulster Park, a daughter, Jaquelyne Orr and her husband Eric of Accord, one sister, Barbara Coughlin and her husband John of West Hurley, three grandchildren, Tarin, Moriha, Patrick, one great grandson, Logan and several nieces and nephews. Her two dogs, Mojo and Zebia and one cat, Cali, also survive. In addition to her parents, Patricia was predeceased by a son, Robert, siblings, Kathleen Oddy, Danny, Wayne and Bobby Dugan and two grandchildren, Hope and Justin. Patricia will be reposing at the Simpson-Gaus Funeral Home, 411 Albany Ave on Thursday, January 5, 2017 from 6-9 PM. A Funeral Service will be held on Friday at the funeral home, at 11:00 AM, with Cantor Robert Cohen of Congregation Emanuel, officiating. Interment will follow in Montrepose Cemetery.
To order memorial trees or send flowers to the family in memory of Patricia M. Schwartz, please visit our flower store.