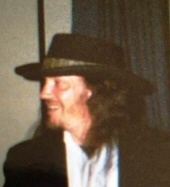 Richard Craig Slater August 18, 1964-April 20, 2013 It is with great sorrow that we mourn the passing of our beloved Richard Craig Slater on April 20, 2013. Born in Englewood Cliffs, New Jersey on August 18, 1964, He was predeceased by his parents Joan Constance Meltz Slater and Albert Isaac Slater. Richie leaves behind a sister, Mona and two brothers, Michael and Jeffrey; nieces, Emily, Sara and Anya; nephews, Jonathan, David, Max and Alex; sisters-in-law, Gloria, Katy, Liz and Kyra; brother-in-law, Roy; great nieces and nephews, and friends. Richie grew up in Englewood Cliffs and Long Island, spent his teenage years living with family in Accord, New York, settling as an adult in Phoenix, Arizona. Always a rebel, Richie lived his life the way he chose, taking little from the world around him but always sharing his love, kind spirit and heartfelt honesty with those he touched. But he was at his best when playing with his nieces and nephews with ease and joy. Richie loved music and especially enjoyed hearing a great guitar solo. His belief in the interconnectedness of life led him away from any formalized religion; but he developed a deeply spiritual inner life that centered on the great love that is within us all. Ten years ago, Richie adopted a black lab puppy, who became his constant companion and best friend. It is a great comfort to his family to know that his dog, Rebel, has been adopted by neighbors in Phoenix, and can live out her life with the love and care that Richie had always given her. We find solace in also knowing that Richie found love and happiness himself in the last years of his life. He is forever in our hearts. In lieu of flowers, donations can be made to your local SPCA and Family of Woodstock.
To order memorial trees or send flowers to the family in memory of Richard Craig Slater, please visit our flower store.