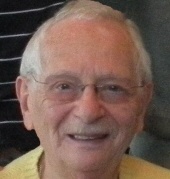 Romain Luksberg, of Shady, passed away Monday, June 17, 2013 at his home. He was 86. He was born in Warsaw, Poland, a son of the late Mordecai and Helene Pargament Luksberg. His father and much of his family perished in the Holocaust. He and his mother survived. He married the love of his life, Augusta Rafalowicz, his Choukie, in Brussels, Belgium on November 11, 1951. He was a second generation handbag manufacturer. In 1960 he founded John Romain Handbags, Inc. in Long Island City. Having owned a weekend residence in Woodstock for many years, in 1973 they moved full-time to Woodstock. Romain relocated the business to Kingston until retirement in 1996. Romain was a passionate stamp collector who appreciated a good bottle of wine and Belgian chocolate. He was the lone Mets fan in the family. Beloved husband of Augusta Luksberg, father of Marco Luksberg and his wife Ellen of Kingston; grandfather of Jeremy Luksberg and Arielle Wein, Joshua Luksberg and his wife Leslie, great grandfather of Jackson Darren and Mallory Romain Luksberg, brother of Fanny Rozental and her husband Henri, their son Marco Rozental and wife Corine and their children Jeremy and Laura Rozental of Belgium, brother in law of Jeanine Burk and her sons Jeff Greenberg and Jan Greenberg and wife, Laura. Funeral Services will be conducted at Simpson Gaus Funeral Home, 411 Albany Ave. on Wednesday at 12:00. Rabbi Jonathan Kligler will officiate. Interment will follow in Montrepose Cemetery. In lieu of flowers, memorial contributions may be made to the United States Holocaust Memorial Museum, 100 Raoul Wallenberg Pl, SW, Washington, DC 20024-2126 (www.ushmm.org).
To order memorial trees or send flowers to the family in memory of Romain Luksberg, please visit our flower store.