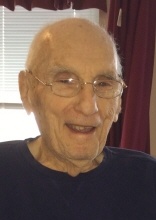 Roscoe F. "Rocky" Altomari, 93, a lifelong resident of Kingston, passed away on Thursday, January 14, 2016 at his home. Rocky was married to the late Rose Toscano, his loving wife of 50 years, who he married on May 7, 1955. He was predeceased by his parents, Charles and Virginia Fiore Altomari; his sisters, Mary Altomari, Emma Mauro, Christine Berardi; brother-in-law, Vincent P. Berardi, and survived by Christine Fix, a niece. He was also a "second father" to Michael (Beverly) Berardi, Virginia (Mitchell) Carmody, Gerard (Mayumi) Berardi, and Bernadette (Michael) McGowan, along with nine great nieces and nephews; and dear friends, John Naccarato and Mike Cacchillo. Fondly known as "Uncle Rocky" to many, he had a contagious sense of humor and zest for life which included a love of golf, movies, boxing and his diner companions. He attended Kingston High School and graduated from the Moran Business School. Rocky enlisted in the United States Marine Corps, serving in the Asiatic Pacific Theater for three and a half years during World War II, including a 14 day military action in 1945, and honorably discharged in 1946. After working 30 years for Electrol, he served as a bailiff at the Ulster County Courthouse for 18 years. Rocky was a member of the American Legion Post #150, a life member of VFW Post #1386, a parishioner of St. Mary's Church and a member of the former Holy Name Society. Rocky will be reposing at the Simpson-Gaus Funeral Home, 411 Albany Avenue on Sunday, January 17, 2016 from 2-6 pm. A service by the Joyce Schirick Post #1386 Color Guard will take place at 5:00 pm. The funeral procession will form from the funeral home on Monday at 9:30 am. A Funeral Mass will be celebrated at 10:30 am at St. Mary's Church. Interment with military honors by the Joyce Schirick Post #1386 Color Guard will follow at St. Mary's Cemetery. The family requests that memorial donations be made to the Hudson Valley Hospice, 400 Aaron Ct., Kingston, NY 12401
To order memorial trees or send flowers to the family in memory of Roscoe F. "Rocky" Altomari, please visit our flower store.