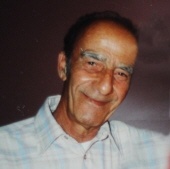 Russell R. Mottsey, 84, a lifelong resident of Kingston, died Saturday, June 17, 2017 at his home. Born in East Kingston, he was a son of the late John & Philomena Fanny Pugliese Mottsey. Russell was a veteran of the US Army, having served during the Korean Conflict. He was a Life Member and former Lieutenant of the East Kingston Fire Company, a member of the Joyce Schirick Post 1386 and the American Legion Post 150. He was a retired truck driver with the Teamsters Local 445 and he also worked for the Ackers Bus Line. Russell was also a member of the Teamsters Retiree Club and a parishioner of St. Colmans Church. He also enjoyed woodworking and made several items for his church. Russell is survived by a son Michael A. Mottsey and his wife, Lynne of Windsor, SC, six grandchildren, Russell Jr, Caitlin, Nicholas, Melaney, Lyndsie & Marissa, a sister, Jenny Lewis of East Kingston and a daughter in law, Karen Mottsey. Several great grandchildren, nieces and nephews also survive. In addition to his parents, Russell was predeceased by his wife of 45 years, Mary Sagendorf Mottsey, who passed in 2002, a son, Russell F. Mottsey, who passed in 2010 and 12 siblings. Russell will be reposing at the Simpson-Gaus Funeral Home, 411 Albany Ave. on Tuesday, June 20, 2017 from 3-7 PM. The funeral procession will form from the funeral home on Wednesday at 9:00 AM. A Funeral Mass will be celebrated at 10:00 AM at St. Colmans Church. Interment, with military honors by Joyce-Schirick Post 1386 Color Guard, will follow in St. Marys Cemetery.
To order memorial trees or send flowers to the family in memory of Russell R. Mottsey, please visit our flower store.