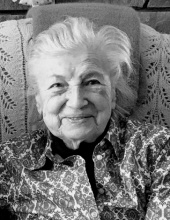 Shirley S. Kobran, 98, of Lake Katrine, died peacefully the morning of September 9, 2019, at HealthAlliance Hospital in Kingston, NY. Born in the Bronx on October 12, 1920, she was a daughter of the late Philip & Ida Weisbrot. Shirley was predeceased by her husband Richard Kobran and son Joel Kobran.

Shirley is survived by three children, Gary Kobran and his wife Rita of South Egremont, MA, Janis Adkins and her husband Paul of Ruskin, FL, and Laura Spaey of Lake Katrine. In addition, Shirley had six grandchildren and 10 great grandchildren.

In a story shared with many, Shirley met the love of her life when she fell at Richard’s feet in the beauty salon where he worked in New York City. It was more or less love at first sight, and they had one of those special marriages which, despite many challenges, was full of much joy and happiness.

To say that Shirley led a remarkable life is an understatement. She relocated with her family to Kingston, NY, in January 1959, to help plan and operate Richard the First Beauty Salon, and later two schools, two more salons, and finally Columbia Beauty Supplies. For her last official business stint, she was a “fixture” at Columbia Beauty and Costume – helping her daughter Laura in the wig department or the office, and wherever she could lend a helping hand.

Shirley was most proud of her volunteer work on many fronts, with the most important being her promotion of recycling in the Hudson Valley. She actively participated in many areas: as a leader in the League of Women’s Voters, as a major contributor to her synagogue, as a pen pal to many local students, as a reader for nursing home residents, as a worker in the local food kitchen, as a member of the PTA at her children’s schools, etc. Her efforts resulted in many awards that reflected her dedication to various non-profit causes. Shirley was honored as Woman of the Year by both B’nai B’rith and the YWCA, and received the Cabrini Gold Medal Humanitarian Award, the Distinguished Achievement Award from the Environmental Management Council of Ulster County, and a mention in the U.S. Congressional Record.

Although she regretted missing college, Shirley was a life-long learner with interests in many spheres. Shirley was an avid reader, whether fiction or non-fiction, and held a reading group in her home – the last one only two weeks ago. She loved classical music, theater, jazz, opera, ballet, and so forth. Shirley also was an avid gardener and still was helping her daughter Laura to tend their gorgeous gardens. Her other passion was travel, and she was about to take a trip to Cape Cod this past Sunday, but, alas, was prevented from doing so.
Shirley was as social a person as one can imagine. She had many friends and made new ones easily. But paramount was the love she bore for her family – for her beloved husband Richard, for her three children, their spouses, and for the many grandchildren and great grandchildren, aunts, uncles, cousins, and their families, and her extended family. A visit from a friend or a family member always made for the best of times for Shirley. She also was the purveyor of a seemingly endless supply of birthday and holiday cards and gifts, most of which she hand-picked for her family. Although she came from a religious upbringing, Shirley developed a deeper connection to her Jewish roots later in life. After studying Hebrew for several years, she had her Bat Mitzvah just before her eightieth birthday.

Remarkable is the only word we can use to sum up Shirley’s extraordinary life. She gave of herself tirelessly and will be sorely missed. We are all confident that Shirley’s next journey will be as productive as what she achieved on this earth. But be warned up there in heaven to get your recycling in order, make sure the library is fully stocked, and the flowers plentiful and ready for picking.

Interment will be held privately.

In lieu of flowers the family requests that donations be made to the charity of your choosing.

Online condolences may be left for the family of Shirley by visiting: www.SimpsonHammerl.com
To order memorial trees or send flowers to the family in memory of Shirley Kobran, please visit our flower store.